Deformation of the Self-Adjusting File on Simulated Curved Root Canals: a Time-Dependent Study

OBJECTIVE: This study examined the surface changes of self-adjusting file after operating in different degrees of canal curvatures with a fixed radius of curvature in different operation intervals.

STUDY DESIGN: Artificial canals were manufactured in a 5-mm radius of curvature with 45° and 60° angles of curvature. Forty self-adjusting files were divided into 2 groups and submitted to functional fatigue to failure. Twenty files were tested using the 45° angle and the remaining 20 were tested using the 60° angle at 4 minutes for 7 periods in a total of 28 minutes. The average time frame for each 4-minute inspection period was considered as the moment of failure at 2, 6, 10, 14, 18, 22, and 26 minutes, respectively. Instruments were evaluated using scanning electron microscopy to characterize the material under study.

RESULTS: The lattice detachment began at the second period for both groups and continued to increase along with the ongoing testing time. The detachment that occurred in 60° canal curvature was higher at the third and fourth periods when compared with the 45° group (P < .05). For both groups, during the third period, detachment of the arch of the lattice was only one sided; however, this deformation was severe between the fourth and sixth periods with a 2-sided detachment, which was easier to separate. The rough surface became smooth after usage. No full separation of the file was evident for both groups.

CONCLUSIONS: In multirooted teeth with severely curved root canals, using more than one self-adjusting file might be recommended to prevent lattice detachment.

The full text of this article is available (PDF) on Researchgate 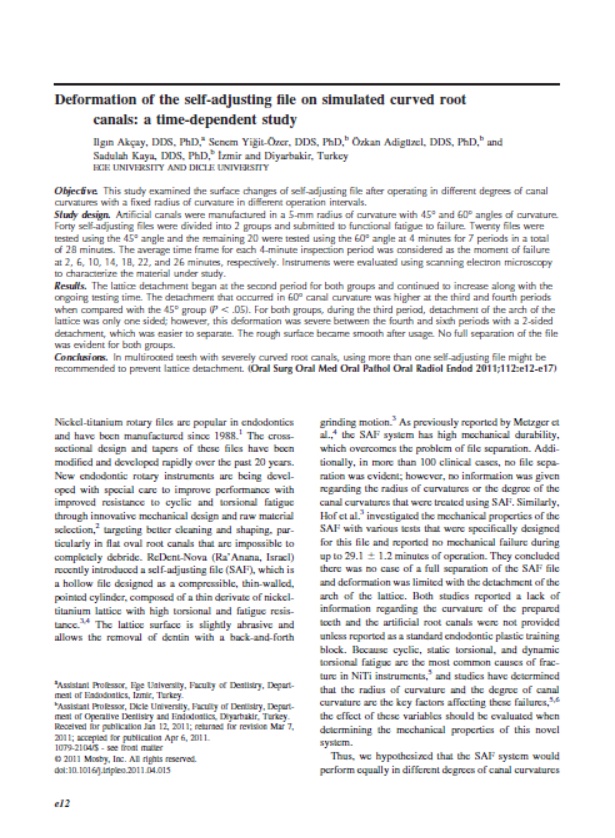