Effects of Self-Adjusting File, Mtwo, and ProTaper on the Root Canal Wall

INTRODUCTION: The purpose of this ex vivo study was to observe the incidence of cracks in root dentin after root canal preparation with hand files, self-adjusting file (SAF), ProTaper, and Mtwo.

METHODS: One hundred extracted mandibular premolars with single canals were randomly selected. Two angulated radiographs were taken for each tooth, and the width of the canal was measured at 9 mm from the apex. Five groups of 20 teeth each were comparable in canal width. The control group was left unprepared. Four experimental groups were instrumented with hand files, ProTaper, Mtwo, and SAF. Roots were then sectioned horizontally and observed under a microscope. The presence of dentinal cracks and their location were noted. The difference between the experimental groups was analyzed with a χ2 test.

CONCLUSION: Instrumentation of root canals with SAF, Mtwo, and ProTaper could cause damage to root canal dentin. SAF has a tendency to cause less dentinal cracks as compared with ProTaper or Mtwo.

The full article is available (PDF) on Academia.edu 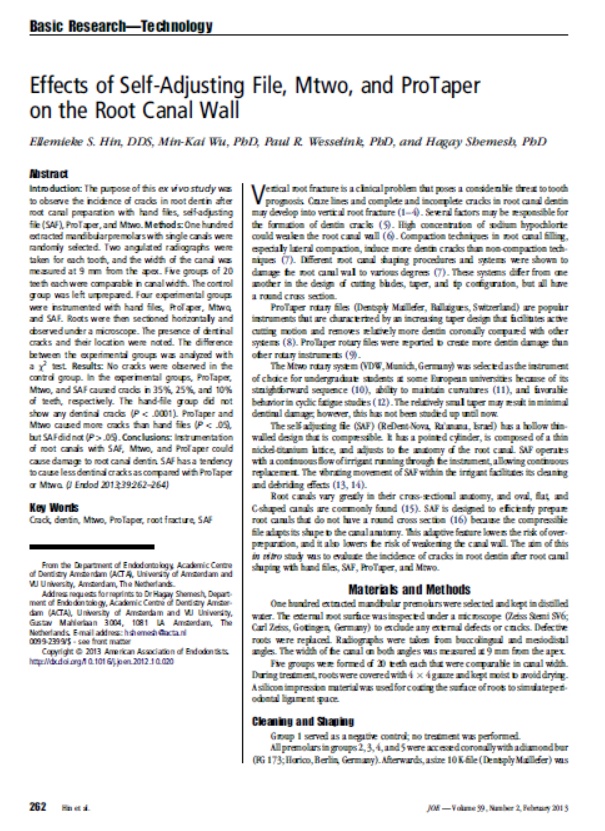 Read previous: The Incidence of Root Microcracks Caused by 3 Different Single-file Systems versus the ProTaper System Read next: Dentinal Microcrack Formation during Root Canal Preparations by Different NiTi Rotary Instruments and the Self-Adjusting File
back to top