INTRODUCTION: The study was designed to explore the mechanical properties of the self-adjusting file (SAF) and its application in the root canal using continuous irrigation.

METHODS: The compressibility of the SAF file and the resulting peripheral force were measured using specially designed systems. The abrasivity of the file was tested on dentin blocks representing a flat root canal. The durability of the SAF file was tested using a functional fatigue-to-failure assay. Degradation of the file was evaluated by using files that were previously used for 10, 20, and 30 minutes and comparing their efficacy with that of new, unused files. The potential of extruding irrigant beyond the apex was explored in roots with an open apical foramen.

RESULTS: The SAF file was elastically compressible from a diameter of 1.5 mm to dimensions similar to those of a #20 stainless steel K-file. This compression resulted in an evenly applied force to the root canal walls. The in-and-out vibration of the file and the peripheral force, combined with its abrasivity, allow for hard-tissue removal. Under the conditions of the experiment, no mechanical failure was observed with up to 29 minutes of operation in the root canal. The file loses its efficacy after prolonged use, with a 40% reduction after 30 minutes of operation. The operation of the file with continuous irrigation did not push the irrigant beyond an open apical foramen.

CONCLUSIONS: The SAF file is an elastically compressible file that effectively removes dentin and can mechanically endure use under its recommended mode of operation with a minimal loss of efficacy.

The full text of this article (PDF) is available on Researchgate 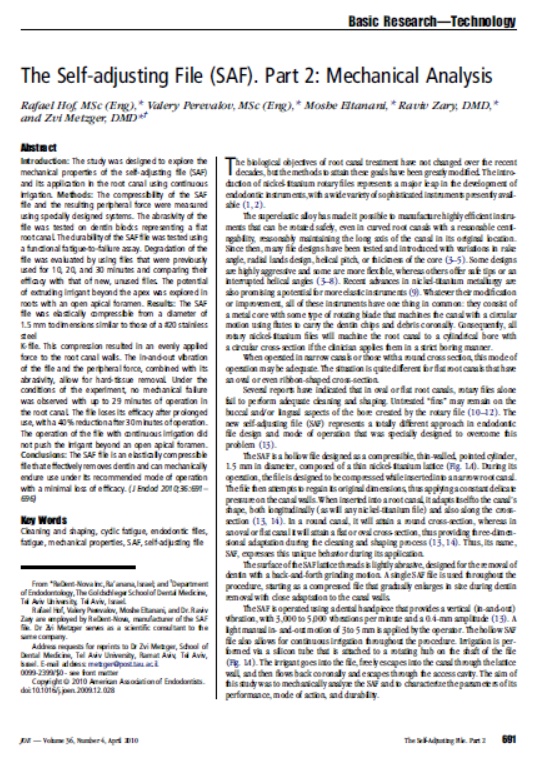 Read previous: Deformation of the Self-Adjusting File on Simulated Curved Root Canals: a Time-Dependent Study
back to top