OBJECTIVES: The objective of this study is to determine the potential for microcracks in the radicular dentin of first maxillary premolars using three different mechanized endodontic instrumentation systems.

METHODS: Eighty extracted maxillary first premolars with two root canals and no externally visible microcracks were selected. Root canal instrumentation was performed with either the ProTaper file system, the WaveOne primary file, or the self-adjusting file (SAF). Teeth with intact roots served as controls. The roots were cut into segments and examined with an intensive, small-diameter light source that was applied diagonally to the entire periphery of the root slice under ×20 magnification; the presence of microcracks and fractures was recorded. Pearson's chi-square method was used for statistical analysis, and significance was set at p < 0.05.

RESULTS: Microcracks were present in 30 and 20 % of roots treated with the ProTaper and WaveOne systems, respectively, while no microcracks were present in the roots treated with the SAF (p = 0.008 and p = 0.035, respectively). Intact teeth presented with cracks in 5 % of the roots. The intensive, small-diameter light source revealed microcracks that could not be detected when using the microscope's light alone.

CONCLUSIONS: Within the limitations of this study, it could be concluded that mechanized root canal instrumentation with the ProTaper and WaveOne systems in maxillary first premolars causes microcracks in the radicular dentin, while the use of the SAF file causes no such microcracks.

CLINICAL RELEVANCE: Rotary and reciprocating files with large tapers may cause microcracks in the radicular dentin of maxillary first premolars. Less aggressive methods should be considered for these teeth.

The full article PDF is available on ResearchGate. 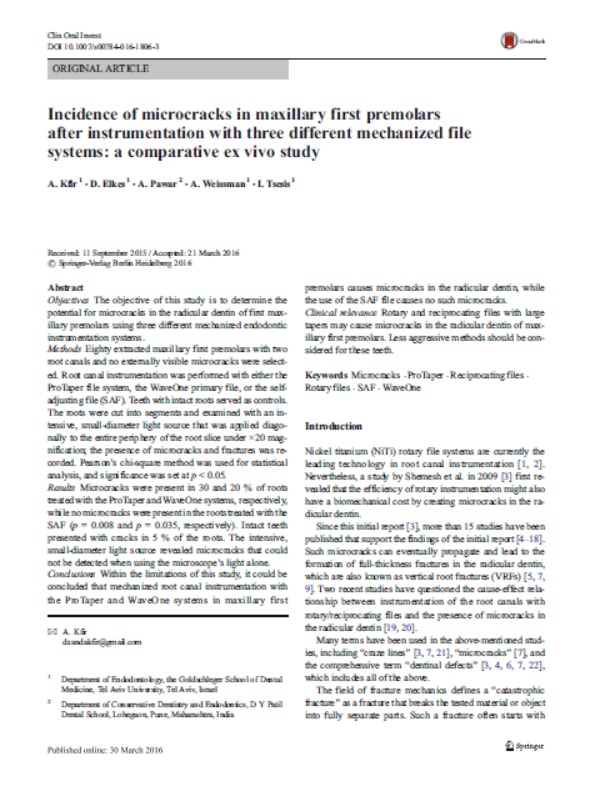