Assessment of the fracture resistance of teeth instrumented using 2 rotary and 2 reciprocating files versus the Self-Adjusting File (SAF): An ex vivo comparative study on mandibular premolars

MATERIALS AND METHODS: Sixty freshly extracted, single-rooted mandibular premolars were acquired and decoronated to obtain 15 mm segments. These samples were randomly divided into six groups (n = 10). Group 1 served as the control containing untreated samples (without instrumentation or filling). In Groups 2-6, samples were instrumented using rotary (Universal ProTaper and Revo-S), reciprocating (WaveOne and RECIPROC; ), and self-adjusting file (SAF), respectively. Following instrumentation, the samples were filled by lateral compaction with Gutta-percha and AH Plus. A week later, after the sealer was completely set, a vertical load was applied to the specimen's canal in each group until fracture. The loads required for fracture were recorded, and statistical analysis was performed.

CONCLUSIONS: The samples instrumented by the SAF exhibited a better fracture resistance.

The full article is available on the website of the Journal of Conservative Dentistry. 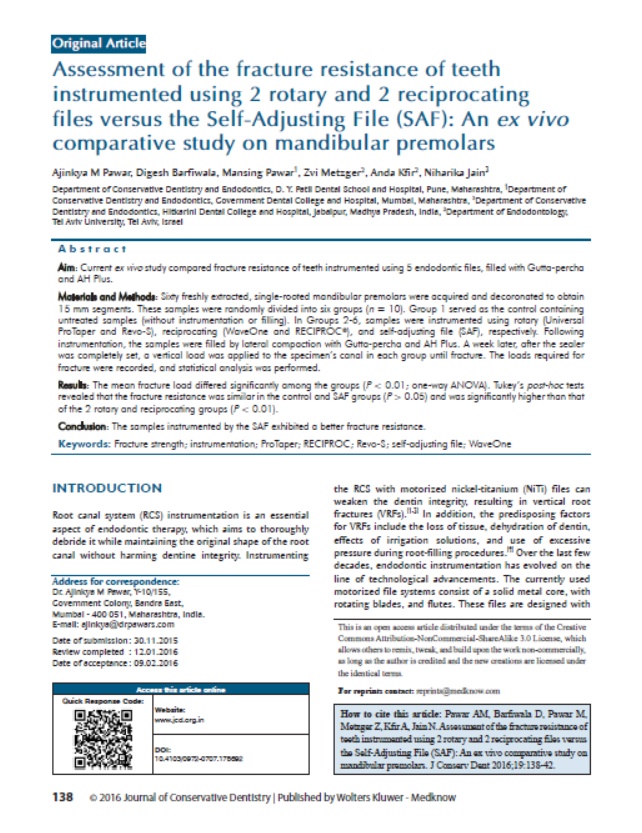 Read previous: Incidence of Microcracks in Maxillary First Premolars After Instrumentation with Three Different Mechanized File Systems: a Comparative Ex Vivo Study Read next: Evaluation of the Incidence of Microcracks Caused by Mtwo and ProTaper NEXT Rotary File Systems versus the Self Adjusting File: A Scanning Electron Microscopic Study
back to top