METHODS: The root canals of 88 extracted single-rooted teeth were prepared using ProTaper rotary instruments (Dentsply Maillefer, Ballagiues, Switzerland) up to size F4. The roots were split longitudinally, and a standardized groove was prepared in the apical part of 1 segment. The root halves were reassembled, and Ca(OH)2 medicament was placed into the root canals using a Lentulo spiral. The roots were randomly divided into 4 experimental groups and 2 control groups according to the different irrigation systems used: conventional syringe irrigation, continuous passive ultrasonic irrigation (PUI), EndoVac irrigation, and SAF irrigation. Each group was then divided into 2 subgroups (n = 10) according to the irrigation protocol: subgroup 1: 10 mL 2.5% NaOCl and subgroup 2: 10 mL 17% EDTA + 10 mL 2.5% NaOCl. The amount of remaining medicament was evaluated under a stereomicroscope at 30× magnification using a 4-grade scoring system. The influences of the different Ca(OH)2 medicament removal methods and irrigation protocols were statistically evaluated using 2-way analysis of variance and Tukey post hoc tests.

CONCLUSIONS: The use of the SAF system with the combination of EDTA and NaOCl enhanced Ca(OH)2 removal when compared with the use of only NaOCl irrigation with the SAF. Continuous PUI and SAF were more effective than EndoVac, and conventional syringe irrigation in the removal of the Ca(OH)2 medicament from an artificial standardized groove in the apical part of the root canals. 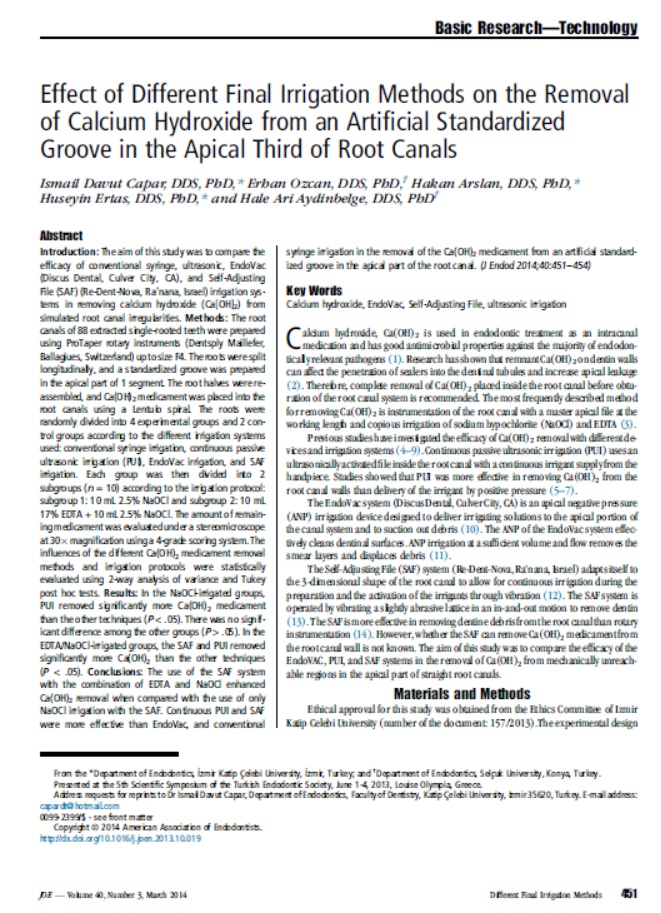