INTRODUCTION: Oval-shaped canals represent a challenge for rotary nickel-titanium (NiTi) files because buccal and/or lingual recesses are commonly left un-instrumented. The aim of the present study was to evaluate the debridement quality of the Self-Adjusting File (SAF) system in oval canals and compare it with the debridement achieved by a commonly used NiTi rotary system.

METHODS: A careful specimen selection resulted in two equal groups each consisting of 12 extracted mandibular canines with oval canals that had vital pulps before extraction. All canals had a buccolingual diameter that was at least 2.5 times larger than that of the mesiodistal one as defined from radiographs. One group was subjected to the SAF protocol, whereas the other group underwent conventional protocol; the ProTaper system up to the F2 instrument was used with syringe and open end needle irrigation. Sodium hypochlorite (5.25%) was used as an irrigant for both groups. The roots were then histologically processed and 0.6-mm thick cross-sections were obtained every 0.5 mm from the 1- to 5-mm apical levels. Morphometric evaluation was performed on cross-sections to determine the amount of remaining pulp tissue as a percent of the root canal area.

RESULTS: The group-by-location interaction was not significant (P > .05), which means that the group comparisons were not dependent on the cross-sectional level. There was significantly greater residual pulp tissue left after ProTaper system instrumentation versus SAF instrumentation (21.4% vs 9.3%, P < .05).

CONCLUSIONS: The SAF protocol was significantly more efficient for debridement of oval root canals than the rotary ProTaper protocol. 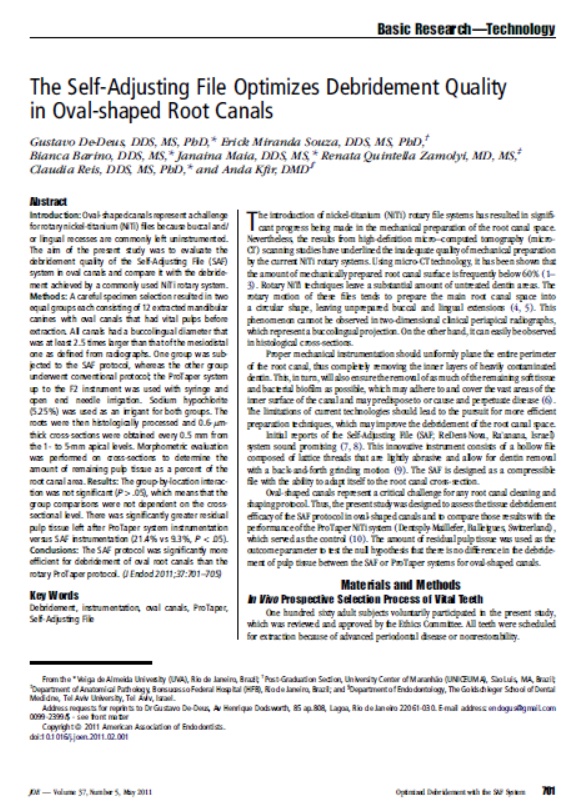