OBJECTIVES: The aim was to evaluate ex vivo apical debris extrusion associated with WaveOne and Self-Adjusting File instruments when used in oval canals.

METHODS: Twenty-four extracted human mandibular premolars with oval-shaped canals were assigned in two equal groups. Following coronal cavity preparation, a glide path was created. Group A was subjected to canal preparation using a WaveOne primary file, which was used along with syringe and needle irrigation and 10 mL of 2.4 % NaOCl solution, followed by flushing with 10 mL of 17 % EDTA solution, activation with EndoActivator for 1 min and final flushing with 10 mL of 2.4 % NaOCl solution, and activation for 30 s. Group B, the SAF system was used with continuous simultaneous irrigation, provided by the system's pump. The irrigant was supplied at 5 mL/min, alternating every minute between 2.4 % NaOCl solution and 17 % EDTA solution, over a total of 4 min followed by final flushing with 10 mL of 2.4 % NaOCl solution. Extruded apical debris from each root canal was collected into a preweighed glass vial and dried. The mean weight of the debris from each group was assessed and analyzed statistically. Both systems resulted in apical debris extrusion.

The full article is available on ResearchGate 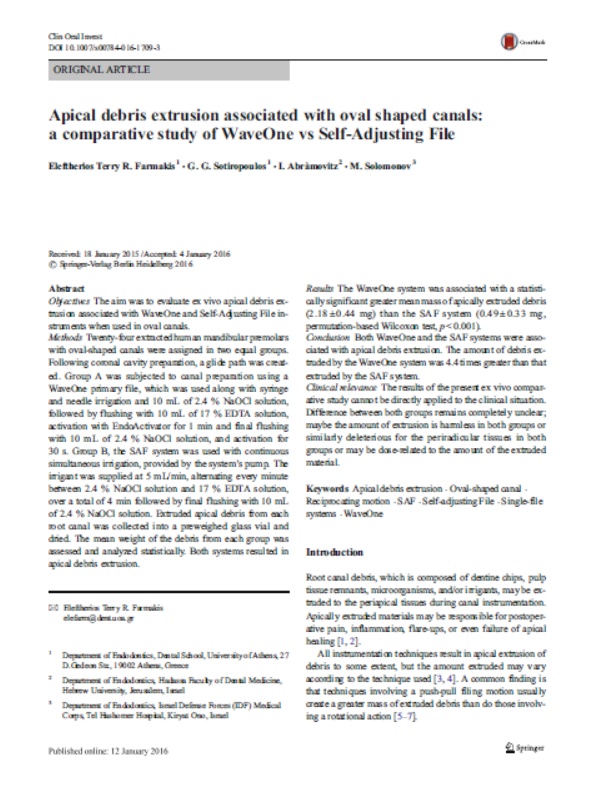 Read previous: Ex Vivo Evaluation of Four Final Irrigation Protocols on the Removal of Hard-tissue Debris from the Mesial Root Canal System of Mandibular First Molars Read next: The Shaping and Cleaning Abilities of Self-adjusting Files in The Preparation of Canals With Isthmuses After Glidepath Enlargement With ISO or ProTaper Universal NiTi Files
back to top