AIM: To assess the ability of sodium hypochlorite (NaOCl) to penetrate simulated lateral canals and to reach working length (WL) when using the self-adjusting file (SAF).

METHODOLOGY: Seventy single-rooted teeth with oval-shaped canals were used. Upon access, presence of a single canal was confirmed by direct visualization under a dental-operating microscope. Canal length and patency were obtained using a size 10 K-file and root length standardized to 18 mm. Pre-enlargement was restricted to the coronal one-third. The apical size of each canal was gauged at WL and samples larger than size 30 were excluded. Canals were instrumented for 5 min using the SAF system while delivering a total of 20 mL of 5.25% NaOCl and 5 mL of 17% EDTA. Then, the apical diameters were standardized to size 35 using hand files. Four hundred and twenty simulated lateral canals were then created during the clearing process and roots coated with wax to create a closed system. All samples were then cleared and randomly assigned to four experimental groups: 1 (n = 15) positive pressure; 2 (n = 15) SAF without pecking motion; 3 (n = 15) SAF with pecking motion; 4 (n = 15) apical negative pressure (ANP) irrigation and (n = 10) control groups. Samples were scored on the basis of the ability of the contrast solution to reach WL and permeate into the simulated lateral canals to at least 50% of the total length. The Kruskal-Wallis test was used to analyse irrigant penetration and the Tukey test to determine statistical differences between groups (P < 0.05).

RESULTS: All samples irrigated with ANP were associated with irrigant penetration to WL (Table 1). The differences between group 4 (ANP) and all other groups were significant in penetration to WL (P < 0.05). The pecking motion allowed for further penetration of the irrigant when using the SAF system but failed to irrigate at WL. None of the experimental groups demonstrated predictable irrigation of simulated lateral canals.

CONCLUSIONS: In this laboratory model, ANP was the only delivery system capable of irrigating consistently to full WL. None of the systems tested produced complete irrigation in artificial lateral canals.

The full article is available for free on Researchgate 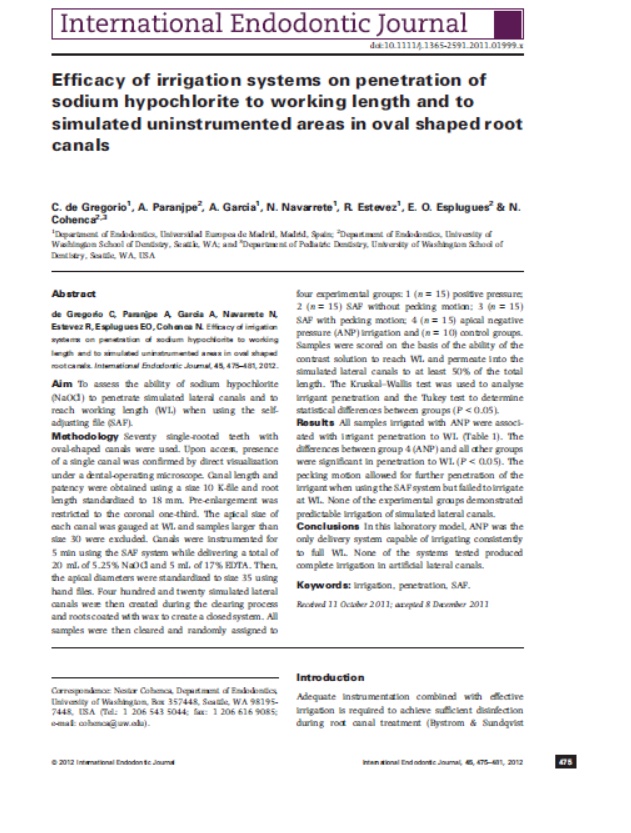 Read previous: Hard-Tissue Debris Accumulation Created by Conventional Rotary versus Self-Adjusting File Instrumentation in Mesial Root Canal Systems of Mandibular Molars Read next: Efficacy of the Self-Adjusting File System on Cleaning and Shaping Oval Canals: A Microbiological and Microscopic Evaluation
back to top