BACKGROUND: The purpose of this study was to evaluate the canal cleaning ability of three novel endodontic rotary instruments and compare with ProTaper files as a control in apical third of root canals under scanning electron microscopy (SEM).

MATERIALS AND METHODS: Eighty freshly extracted mandibular premolars were selected according to inclusion criteria. Buccal cusp tips were ground to ensure having a flat coronal reference point with a total tooth length of 16 mm for all samples. Teeth were divided equally into four groups: Group I (ProTaper group), Group II (ProTaper next group), Group III (variable taper group), and Group IV (self-adjusting file [SAF] group). Using SEM, the dentinal surfaces were observed and rated at apical thirds with a magnification of ×1000 for the presence/absence of smear layer and debris. Descriptive analysis was performed, and analysis of variance with Bonferroni post hoc test was carried out for comparison between the groups, at a significance level of 0.05.

RESULTS: There was statistically significant difference between Group II and Group IV for debris (P = 0.047) and smear layer (P = 0.037).

CONCLUSION: In apical third of root canal, SAF showed statistically significant canal cleaning ability due to combined effect of continuous streaming irrigation with effectively replacing the irrigant from the apical portion of the root canal, irrigants activation through the creation of turbulence, and its self-adapting design to root canal anatomy with a scrubbing motion on the canal walls.

The full article is available for free on the website of the Dental Research Journal. 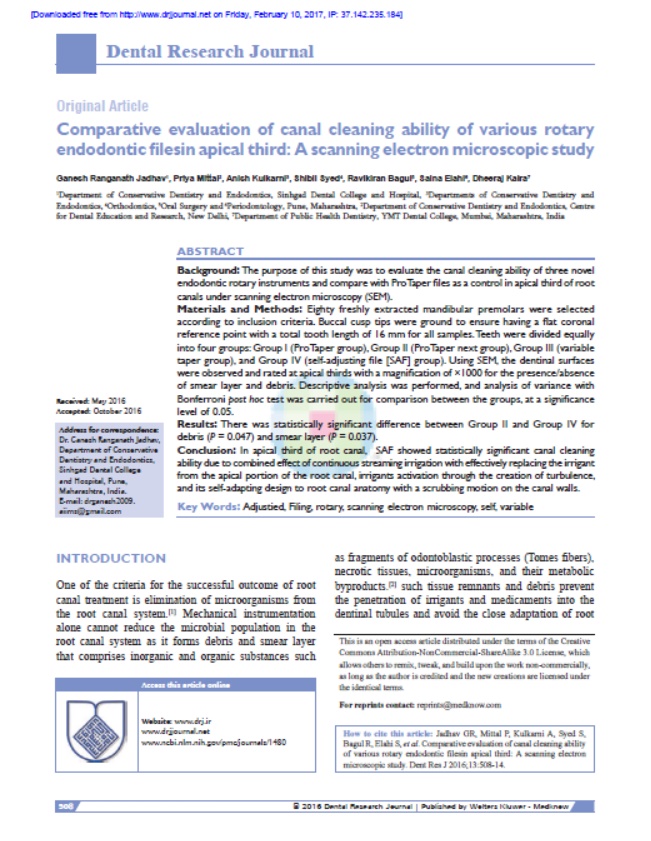