METHODS: One hundred and forty-one patients with vital molars indicating for conventional singlevisit root canal treatment were randomly assigned to one of three groups (n = 47) according to the instrumentation system used: WaveOne, One Shape and SAF. Participants were asked to rate the intensity of postoperative pain on a Functional Pain Scale and to record the quantity of prescribed analgesic medication taken after 24 h, 48 h, 72 h and 7 days. Data were statistically analysed using SPSS software (version 20; Chicago, Illinois, USA). Intergroup analysis was performed using the Kruskal-Wallis, followed by Mann-Whitney U tests for intragroup comparison. The Friedman test was applied for comparison between different time intervals. The level of significance was set at P < 0.05.

RESULTS: Patients treated with the SAF system were associated with significantly less postoperative pain and lower analgesic intake compared to the other two groups at the four timepoints assessed.

The full article is available for free on Researchgate. 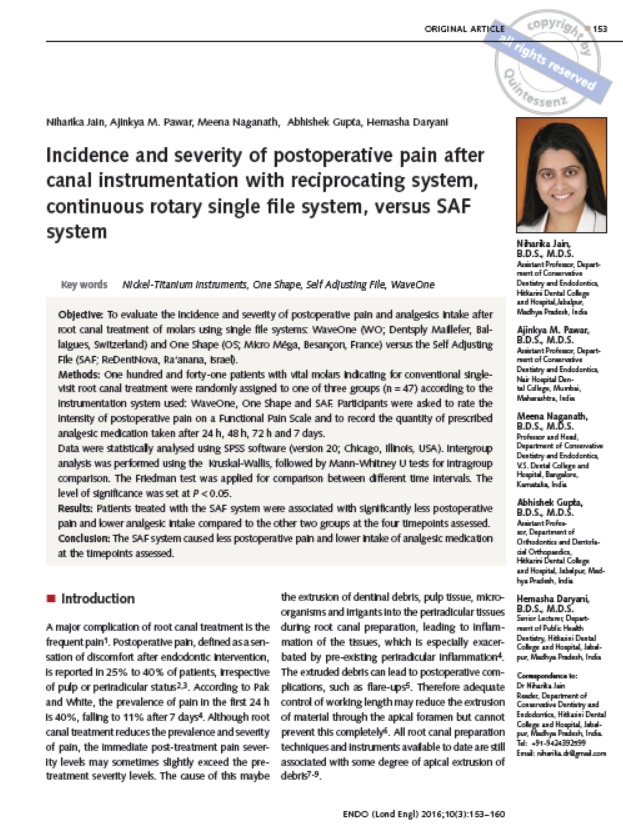