AIM: To compare and evaluate the cleaning ability of two reciprocating systems, that is, WaveOne (WO) and self-adjusting files (SAF) in terms of removal of smear layer using sodium hypochlorite (NaOCl) and chlorhexidine gluconate (CHX) at apical one-third of the root canal.

MATERIALS AND METHODS: Forty-three human maxillary anterior teeth were selected. The canal was instrumented manually up to a number 25 K-file size. WO and SAF were used to prepare the root canals. The following groups were studied: Group 1 using WO:-Group 1a = 5% NaOCl + 17% ethylenediaminetetraacetic acid (EDTA), Group 1b = 2% CHX + 17% EDTA, Group 2 using SAF:-Group 2a = 5% NaOCl + 17% EDTA, Group 2b = 2% CHX + 17% EDTA. All roots were split longitudinally and subjected to scanning electron microscopic. The presence of smear layer apical thirds was evaluated using a 5-score evaluation system. Chi-square tests were used for statistical analysis.

RESULTS: The results showed no significant difference in smear layer removal among both reciprocating system and among the irrigants. Group 2a exhibited the best results and was close to significant difference in score (P > 0.05). The NaOCl + EDTA solution used in Group 1a and Group 2a could effectively remove the smear layer in most of the specimens. However, SAF was more effective than WO in the apical third of the canal.

CONCLUSION:
The results obtained from the present study suggest that using the SAF system and continuous irrigation action with NaOCl and EDTA solution could overcome the difficulty of removing smear layer even in hard-to-reach regions of the root canal.

The full article is available on the website of the Journal of Conservative Dentistry: 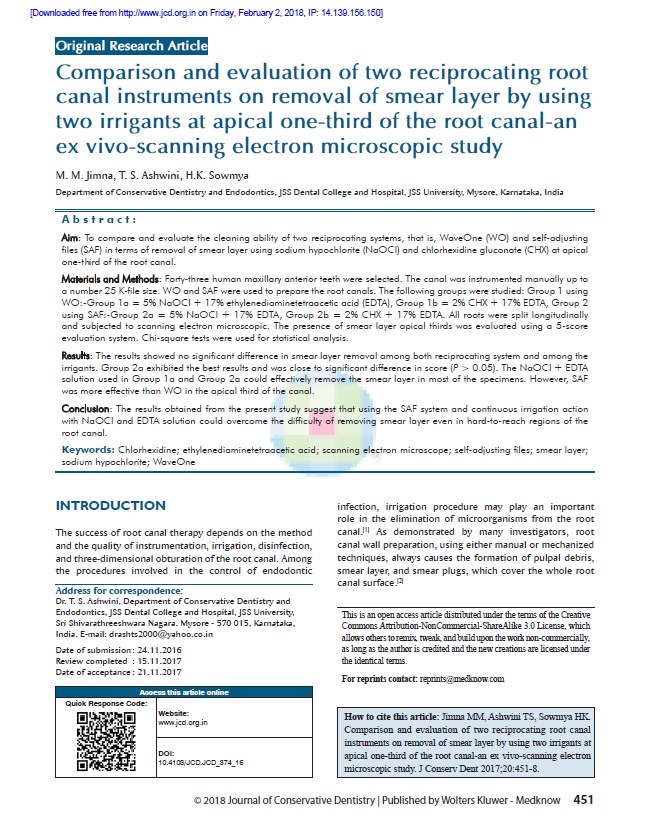