INTRODUCTION: The purpose of this study was to evaluate the amount of apically extruded debris in flat-oval root canal systems during cleaning and shaping with different instrumentation systems.

METHODS: Seventy-two mandibular incisors were randomly assigned to 4 groups (n = 18) according to the instrumentation system to be used: the ProTaper Next rotary system (PTN; Dentsply Tulsa Dental, Tulsa, OK), the WaveOne reciprocating system (WO, Dentsply Tulsa Dental), the Twisted File Adaptive (TFA; SybronEndo, Orange, CA) rotary/reciprocating system, and the Self-Adjusting File (SAF) system (ReDent-Nova, Ra'anana, Israel). Debris extruded during the instrumentation was collected and dried in preweighed Eppendorf tubes. Three consecutive weights were obtained for each tube, and the average was calculated. The data were analyzed using the t test and analysis of variance (Games-Howell test).

RESULTS: The SAF produced significantly more debris compared with the other systems (P < .05). No significant difference was noted amongst the PTN, WO, and TFA (P > .05). 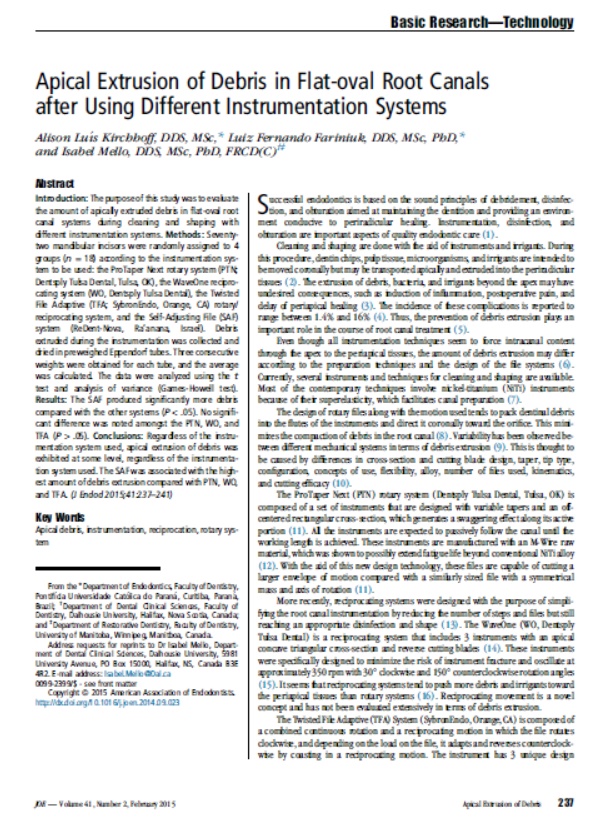