AIM: The aim of this study was to evaluate the cleaning ability of the Self-Adjusting File (SAF) system in terms of removal of debris and smear layer.

METHODOLOGY: Root canal preparations were performed in 20 root canals using an SAF operated with a continuous irrigation device. The glide path was initially established using a size 20 K-file followed by the SAF file that was operated in the root canal via a vibrating motion for a total of 4 minutes. Sodium hypochlorite (3%) and EDTA (17%) were used as continuous irrigants and were alternated every minute during this initial 4-minute period. This was followed by a 30-second rinse using EDTA applied through a non-activated SAF and a final flush with sodium hypochlorite. The roots were split longitudinally and subjected to scanning electron microscopy (SEM). The presence of debris and a smear layer in the coronal, middle, and apical thirds of the canal were evaluated through the analysis of the SEM images using five-score evaluation systems based on reference photographs.

CONCLUSIONS: The operation of the SAF system with continuous irrigation coupled with alternating sodium hypochlorite and EDTA treatment resulted in a clean and mostly smear layer-free dentinal surface in all parts of the root canal.

The full article is available on Endoexperience 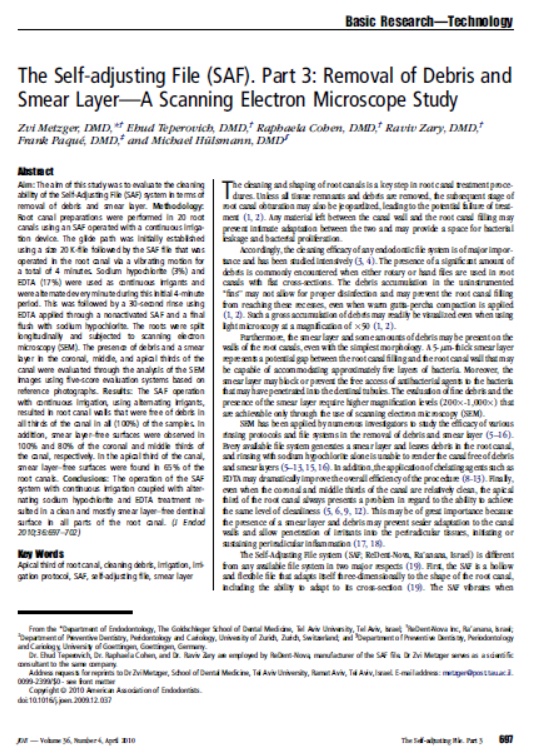 Read previous: The Self-Adjusting File (SAF). Part 1: Respecting the Root Canal Anatomy - A New Concept of Endodontic Files and Its Implementation
back to top