AIM: To evaluate the accumulation of hard-tissue debris when using the Self-adjusting File (SAF) system in mesial roots of mandibular molars with isthmuses and to compare it with that occurring when the ProTaper file system was used.

METHODOLOGY: Forty extracted human mandibular molars with joining mesial root canals and an isthmus between the two canals were randomly assigned to two experimental groups and scanned using micro-computed tomography. Root canals in the control group (N = 20) were instrumented using the ProTaper rotary system until F3. Irrigation with 1 mL of 3% NaOCl solution was applied after each instrument. Root canals in the experimental group (N = 20) were prepared using the SAF for 4 min, with continuous irrigation (3% NaOCl, 4 mL min(-1)). After rescanning, canals in both groups were further irrigated with 5 mL of 17% EDTA for 2 min. After final scanning, the per cent value of total canal system volume filled with hard tissue debris was calculated. Statistical analysis was performed using Mann–Whitney U-test; the alpha-type error was set at 1%. 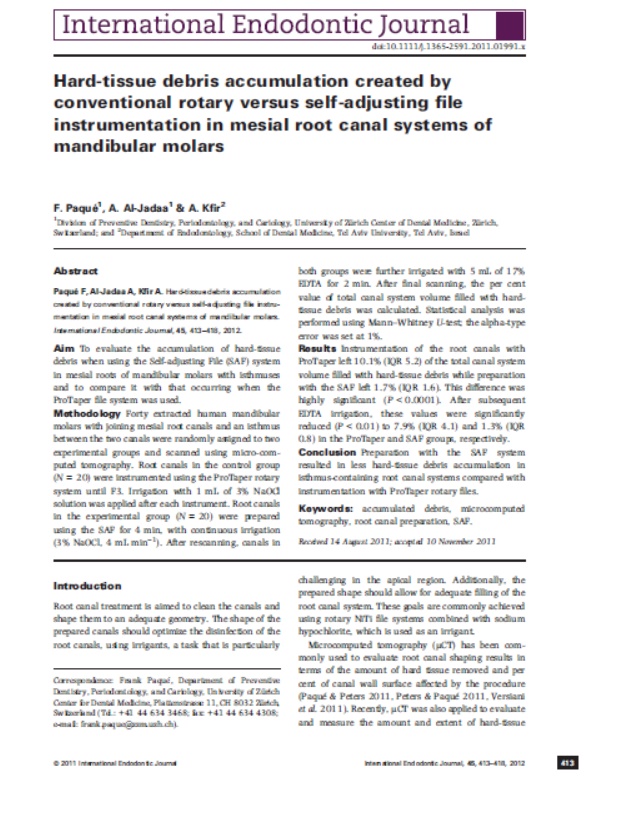 Read previous: In Vitro Canal and Isthmus Debris Removal of the Self-Adjusting File, K3, and WaveOne Files in the Mesial Root of Human Mandibular Molars Read next: Efficacy of Irrigation Systems on Penetration of Sodium Hypochlorite to Working Length and to Simulated Uninstrumented Areas in Oval Shaped Root Canals
back to top