MATERIALS AND METHODS: Forty mesial roots of mandibular molars presenting isthmuses type I or III were scanned in a micro-CT device and instrumented up to Reciproc R40 instrument. After the completion of canal preparations, root canals of each group were submitted to a final rinse using 20 mL of solution (16 mL of 5.25% NaOCl and 4 mL of 17% EDTA) in a total time of 5 min according to one of the four final irrigation protocols (n = 10): PUI, EndoVac, SAF and EasyClean operated at reciprocating motion. The sample was scanned again after canal preparation and after the use of the final irrigation protocols, and the registered data sets were examined to evaluate the percentage of AHTD. Data were statistically compared using the Tukey test with a significance level set at 5%.

CONCLUSIONS: All final irrigation protocols showed the same effectiveness in the removal of AHTD. None of them was able to render mesial canals of mandibular molars completely free from packed debris. 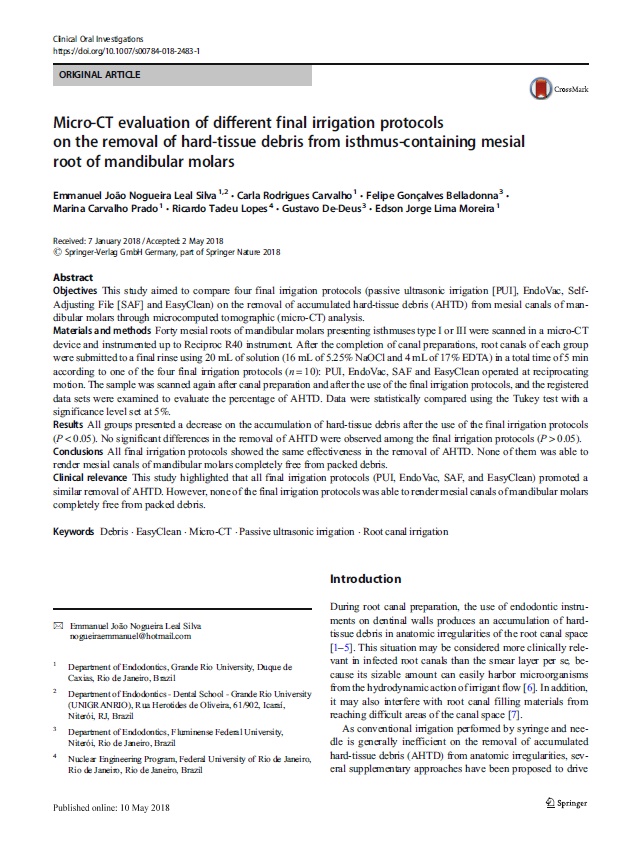 Read previous: Comparison of the Incidence of Postoperative Pain After Using a Continuous Rotary System, a Reciprocating System, and a Self-Adjusting File System in Single-visit Endodontics: A Prospective Randomized Clinical Trial Read next: Apical Extrusion of Debris in Primary Molar Root Canals Using Mechanical and Manual Systems
back to top