This study compared the effect of intermediate flush with distilled water delivered by conventional irrigation, EndoVac microcannula or Self-Adjusting File (SAF) system in the prevention of chemical smear layer (CSL) formation. Thirty human premolars were used. Canals were prepared with Reciproc system and 5.25% NaOCl. After chemomechanical preparation, samples were divided in 3 groups (n=10) according to the intermediate irrigation protocol with distilled water using: conventional irrigation, EndoVac microcannula or SAF. A final flush with 2% chlorhexidine solution was used and scanning electron microscopy was performed to assess protocol effectiveness. Two calibrated evaluators attributed scores according the presence or absence of CSL on the surface of the root canal walls at the coronal, middle and apical thirds, as follows: (1) no CSL; (2) small amounts of CSL; (3) moderate CSL; and (4) heavy CSL. Differences between protocols were analyzed with Kruskal-Wallis and Mann-Whitney U tests. Friedman and Wilcoxon signed rank tests were used for comparison between each root canal third. SAF resulted in less formation of CSL when compared with the conventional irrigation and EndoVac microcannula (p<0.05). When root canal thirds were analyzed, conventional irrigation and EndoVac groups showed less CSL formation at coronal and middle thirds in comparison to the apical third (p<0.05). In SAF group, there was no difference among the thirds (p>0.05). It may be concluded that an intermediate flush of distilled water, delivered by the SAF system resulted in a better reduction of CSL formation during chemomechanical preparation.

The full article is available for free on the website of the Brazilian Dental Journal: 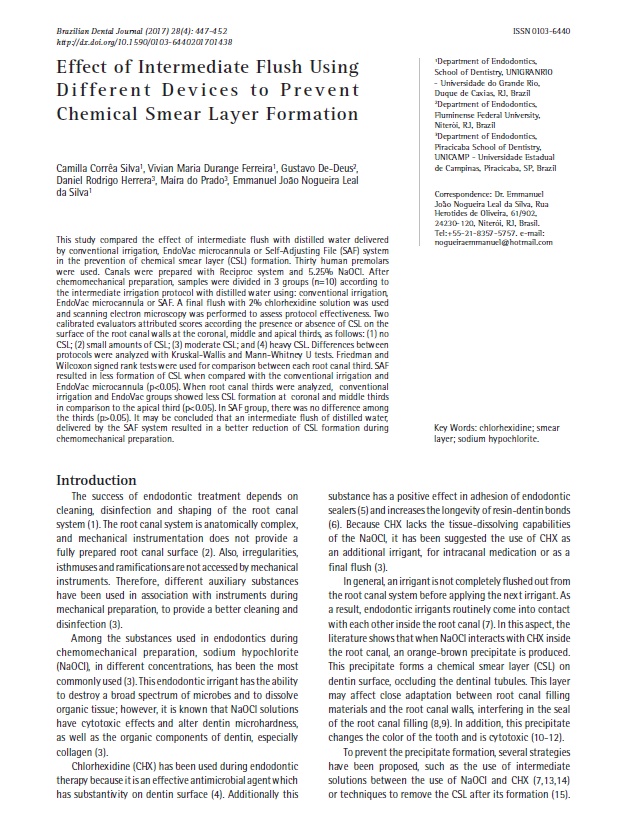