INTRODUCTION: Oval-shaped root canals might represent a great challenge for proper disinfection. This study compared the capability of a newly developed instrument, the self-adjusting file (SAF), and rotary nickel-titanium (NiTi) instrumentation to eliminate Enterococcus faecalis populations from long oval root canals of extracted human teeth. As a secondary purpose, the ability of a modification in sampling technique to recover bacteria lodged in recesses of oval canals was evaluated.

METHODS: Long oval canals from mandibular incisors and maxillary second premolars were infected with E.faecalis (ATCC 29212) for 30 days and then randomly distributed into 2 experimental groups. In group 1, canals were prepared up to a 40/04 rotary BioRaCe instrument by using irrigation with NaviTip needles; in group 2, canals were prepared by using the SAF system with continuous irrigation. NaOCl and ethylenediaminetetraacetic acid were used as irrigants. Bacteriologic samples were taken before (S1) and after preparation (S2a and S2b).

RESULTS: Reduction in the bacterial populations was highly significant in both groups (P < .001). Preparation of long oval canals with the SAF was significantly more effective than rotary NiTi instrumentation in reducing intracanal E. faecalis counts (P = .01). Frequency of positive cultures in S2 samples was 11 of 20 (55%) for rotary instrumentation and 4 of 20 (20%) for SAF instrumentation (P = .048). S2b samples (modified method) yielded more positive samples than S2a (12/40 vs. 5/40), but this difference reached no statistical significance (P > .05). 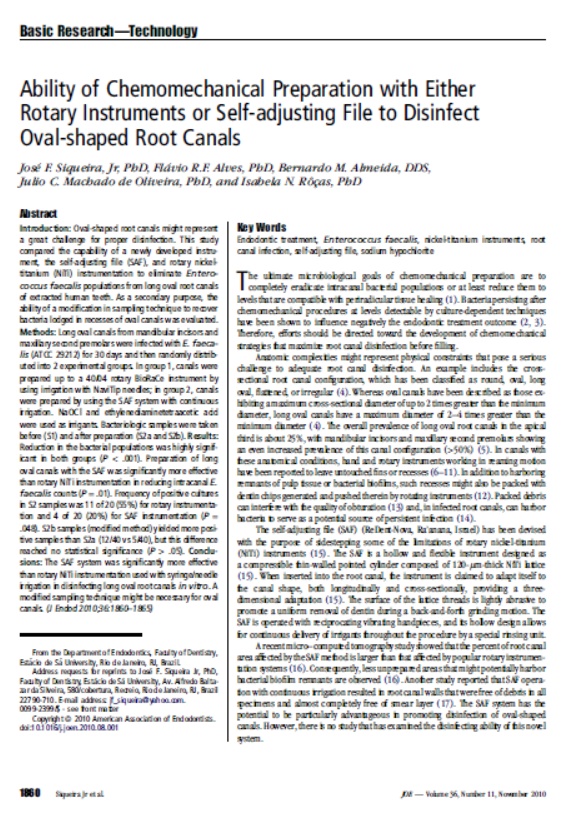