Comparative Evaluation of Apically Extruded Debris with V-Taper, ProTaper Next, and the Self-adjusting File Systems

BACKGROUND: Complete cleaning of the root canal is the goal for ensuring success in endodontics. Removal of debris plays an important role in achieving this goal. In spite of advancements in instrument design, apical extrusion of debris remains a source of inflammation in the periradicular region.

AIM: To comparatively evaluate the amount of apically extruded debris with V-Taper, ProTaper Next, and the self-adjusting File (SAF) system.

CONCLUSION: The SAF showed least amount of apical debris extrusion when compared to newer rotary endodontic instruments. This indicates that the incidence of inter-treatment flare-ups due to debris extrusion would be less with the SAF.

The full text of this article is freely available on the website of the Journal of Conservative Dentistry. 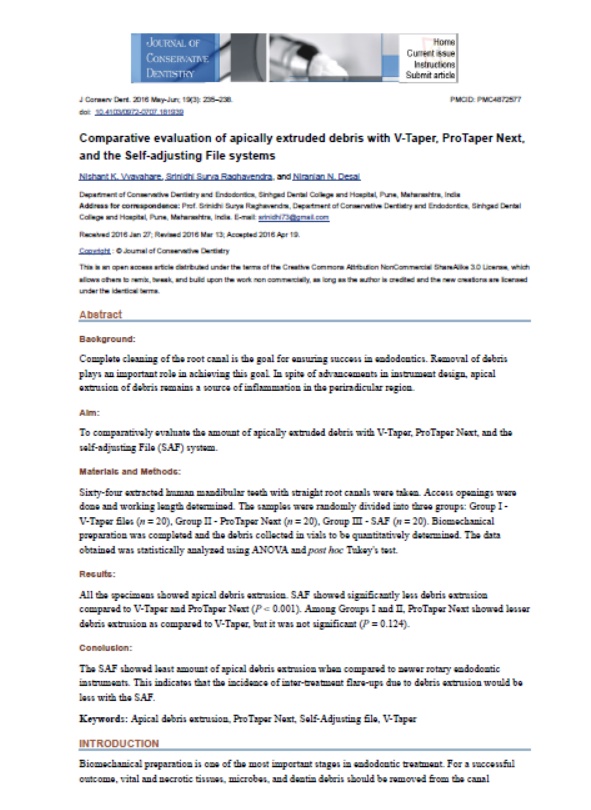 Read previous: Influence of Apical Enlargement and Complementary Canal Preparation with the Self-Adjusting File on Endotoxin Reduction in Retreatment Cases Read next: Comparison of Postoperative Pain in Single-visit and Multiple-visit Endodontic Therapy Using ProTaper Universal, Hero Shaper and The Self-Adjusting File - A Split-Mouth Clinical Trial
back to top