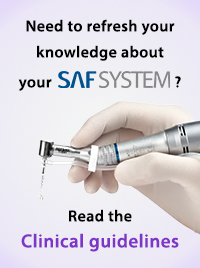 A successful root canal treatment relies on addressing to the root canal anatomy and possible variation with its thorough management. C-shaped root canal is an anatomic variation that presents an endodontist with diagnostic, operational, debridement and obturation challenges. A mandibular second molar frequently exhibits this root canal configuration with some cases reported in mandibular premolars and maxillary molars also. The Self-Adjusting File (SAF) (Re-Dent-Nova, Ra'anana, Israel) has introduced a new era of three-dimensional adaptive endodontics for treating irregularly shaped canals, including flat-oval canals like those in C-shaped. This file is advantageous as it is associated with continuous irrigation during shaping, effectively debriding and disinfecting the root canals. This paper presents a case series of C-shaped canals seen in mandibular second molar, diagnosed and endodontically managed using the novel three-dimensional concept of the Self-Adjusting File System.

The PDF of the full article is available on Researchgate.

Read previous: Use of Cone-beam Computed Tomography during Retreatment of a 2-rooted Maxillary Central Incisor: Case Report of a Complex Diagnosis and Treatment Read next: Single C-Shaped Canal in Mandibular First Molar: A Case Report
back to top