AIM: This study compared the ability of three retreatment approaches, one of them using a supplementary step with the self-adjusting file (SAF), to remove filling materials from the apical root canal.

MATERIALS and METHODS: Sixty incisors and canines were endodontically treated and distributed into three groups. The filling materials were initially removed by using D-RaCe instruments. In group Kosl, canals were enlarged up to one size larger than the first one to bind at the working length using a hand K-file; in group Kss/SAF, canals were prepared with a K-file of the same size of the apical canal and then the SAF instrument was used for 2 mins. In group Hss/Kosl, canals were instrumented with a Hedström file of the same size of the apical canal in circumferential filing motion and then enlarged one size larger with a K-file. The roots were longitudinally split and the canals were analysed under a stereomicroscope. The percentage of apical cleaned area was calculated.

RESULTS: The results indicated that the three protocols were similarly effective in cleaning (P > 0.05). Total removal of the filling material was rarely observed.

CONCLUSIONS: During retreatment of relatively straight canals that are circular in cross section, there appears to be no further benefit in performing a supplementary step with the SAF instrument or filing with Hedström files after enlarging the apical root canals up to one size larger than the first instrument to bind at the working length. 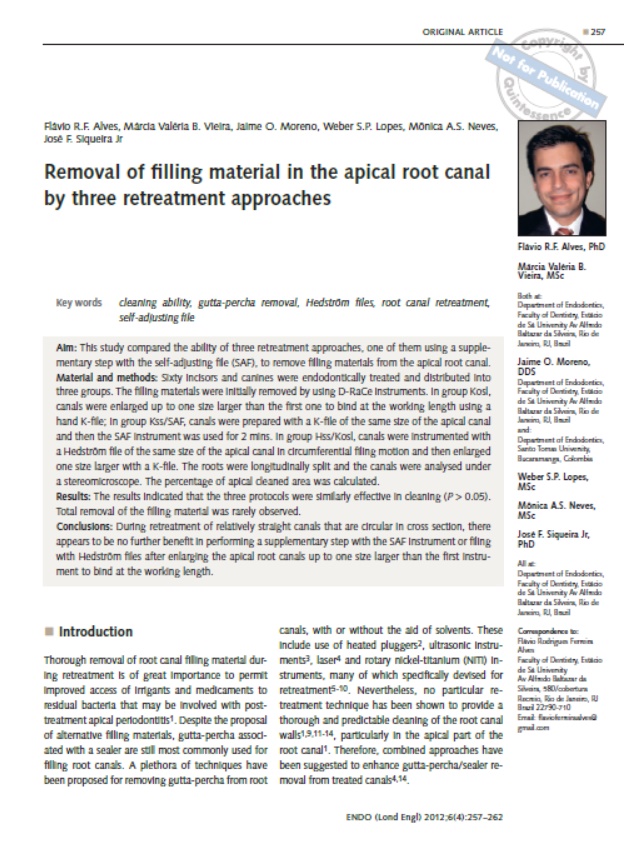