Push-out Bond Strength of Root-Fillings Made with Gutta-Percha and AH Plus in Oval Canals Instrumented with Self-Adjusting File (SAF), WaveOne and Protaper NEXT - A Comparative Ex Vivo Study

MATERIALS AND METHODS: 60 recently extracted mandibular premolars exhibiting oval canals were selected for the study. These samples were randomly divided into 3 groups (n=20) for instrumentation: Group 1: Self-Adjusting File; Group 2: WaveOne and Group 3: Protaper NEXT. Post instrumentation, the samples were obturated with gutta-percha and AH Plus, and the sealer was allowed to set for 7 days. The teeth were then prepared for micro push-out assesment using 1.0 mm-thick root slices. Loading was performed with a universal testing machine at a speed of 0.5 mm/min. The load at which push-out occurred was registered and statistical analysis was done using one-way analysis of variance and Tukey's post hoc test.

CONCLUSION: Guta-percha/AH Plus root fillings exhibited higher bond strength in oval canals instrumented by the SAF System, as compared to WaveOne or Protaper NEXT.

The full text of this article is available for free on Researchgate. 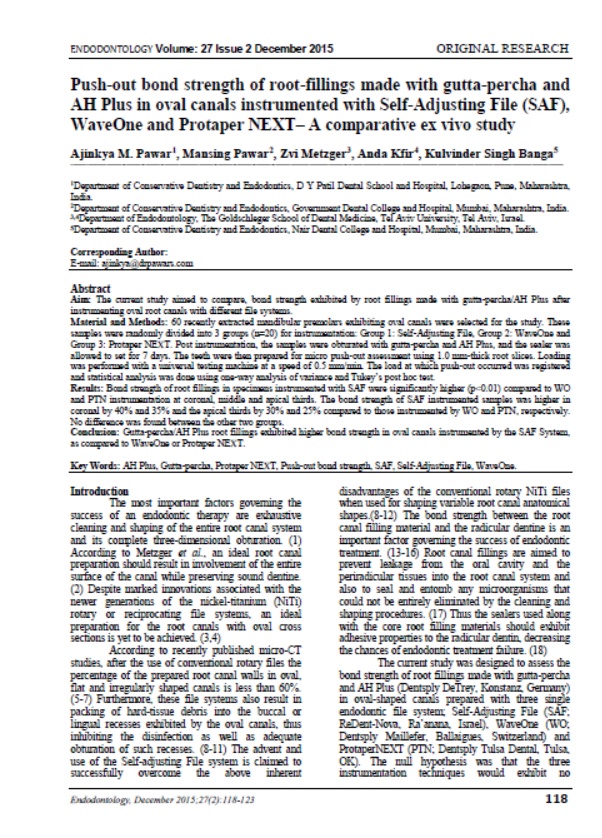 Read previous: Radiological, Stereological and Microscopic Evaluation of the Quality of Canal Fillings in Oval-Shaped Root Canals Prepared with Self-Adjusting File Read next: Infection Control in Retreatment Cases: In Vivo Antibacterial Effects of 2 Instrumentation Systems
back to top