Push-Out Bond Strength of Root Fillings Made With C-Point and BC Sealer vs. Gutta Percha and AH Plus After The Instrumentation of Oval Canals With The Self-Adjusting File vs. Waveone

AIM: To compare the push-out bond strength exhibited by root fillings performed with either C-Point and Endosequence® BC sealer™ (BC Sealer) or gutta-percha and AH Plus® after the instrumentation of oval canals with either the Self-Adjusting File (SAF) System or WaveOne (WO) reciprocating file.

RESULTS: All specimens filled with C-Point and BC sealer were associated with significantly higher push-out bond strength compared with gutta-percha and AH Plus sealer (p < 0.001). The bond strength was higher for the coronal and apical samples of the C-Point/ BC sealer/SAF group (6.6 ±0.3 and 3.2 ±0.3 MPa) versus those of the gutta-percha/AH Plus/ WO group (4.8 ±0.3 and 1.8 ±0.3 MPa), by 38% and by 80% in the coronal and apical parts, respectively (p<0.001, p< 0.0001). Adhesive bond failure was more common in the WaveOne-instrumented group in general and in the buccal and lingual recesses in this group in particular.

CONCLUSIONS: In oval canals, the instrument used and the root filling material significantly affected the push-out values of root fillings. The highest value was recorded in oval root canals instrumented with the SAF System and filled with C-Point and BC sealer, whereas the lowest strength was noted in oval canals instrumented with WaveOne and filled with gutta-percha and AH Plus sealer.

The full article is available on Researchgate. 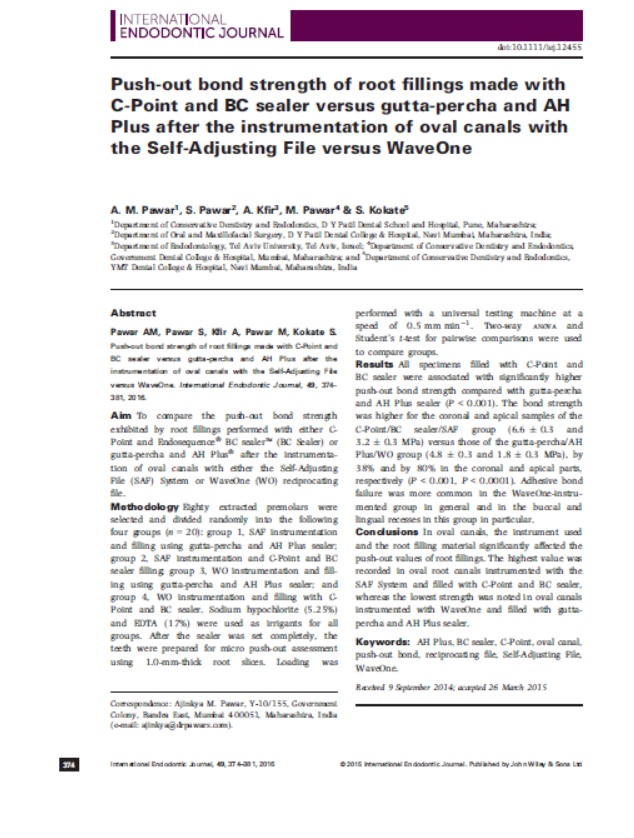 Read previous: Infection Control in Retreatment Cases: In Vivo Antibacterial Effects of 2 Instrumentation Systems Read next: Retreatment of Flat-Oval Root Canals with A Self-Adjusting File: An SEM Study
back to top