The Efficacy of the Self-Adjusting File versus WaveOne in Removal of Root Filling Residue that Remains in Oval Canals after the Use of ProTaper Retreatment Files: A Cone-Beam Computed Tomography Study

MATERIALS AND METHODS: Forty maxillary canines with single oval root canal were selected and sectioned to obtain 18-mm root segments. The root canals were instrumented with WaveOne primary files, followed by obturation using warm lateral compaction, and the sealer was allowed to fully set. The teeth were then divided into two equal groups (N = 20). Initial removal of the bulk of root filling material was performed with ProTaper retreatment files, followed by either WaveOne files (Group 1) or SAF (Group 2). Endosolv R was used as a gutta-percha softener. Preoperative and postoperative high-resolution cone-beam computed tomography (CBCT) was used to measure the volume of the root filling residue that was left after the procedure. Statistical analysis was performed using t-test.

CONCLUSIONS: When SAF was used after ProTaper retreatment files, significantly less root filling residue was left in the canals compared to when WaveOne was used.

The full text for this article is available for free online on the website of the Journal of Conservative Dentistry. 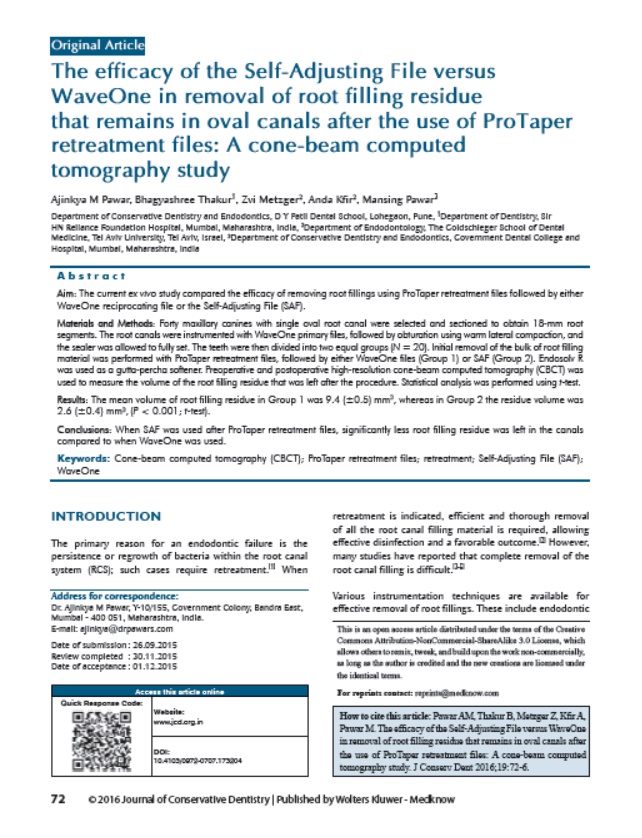 Read previous: Efficacy of Combined Use of Different Nickel-Titanium Files on Removing Root Canal Filling Materials Read next: Radiological, Stereological and Microscopic Evaluation of the Quality of Canal Fillings in Oval-Shaped Root Canals Prepared with Self-Adjusting File
back to top