ABSTRACT: The aim of this study was to compare the efficacy of D-RaCe files and a self-adjusting file (SAF) system in removing filling material from curved root canals instrumented and filled with different techniques by using microcomputed tomography (micro-CT). The mesial roots of 20 extracted mandibular first molars were used. Root canals (mesiobuccal and mesiolingual) were instrumented with SAF or Revo-S. The canals were then filled with gutta-percha and AH Plus sealer using cold lateral compaction or thermoplasticized injectable techniques. The root fillings were first removed with D-RaCe (Step 1), followed by Step 2, in which a SAF system was used to remove the residual fillings in all groups. Micro-CT scans were used to measure the volume of residual filling after root canal filling, reinstrumentation with D-RaCe (Step 1), and reinstrumentation with SAF (Step 2). Data were analyzed using Wilcoxon and Kruskal-Wallis tests. There were no statistically significant differences between filling techniques in the canals instrumented with SAF (P = 0.292) and Revo-S (P = 0.306). The amount of remaining filling material was similar in all groups (P = 0.363); all of the instrumentation techniques left filling residue inside the canals. However, the additional use of SAF was more effective than using D-RaCe alone. 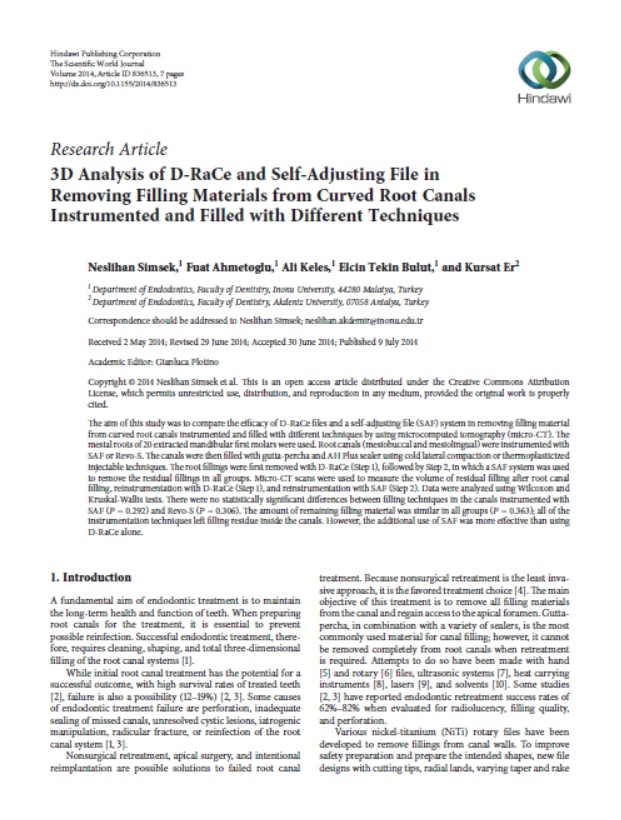 Read previous: Retreatment of Flat-Oval Root Canals with A Self-Adjusting File: An SEM Study Read next: Efficacy of Different Solvents in Removing Gutta-Percha from Curved Root Canals: A Micro-Computed Tomography Study
back to top