INTRODUCTION: The aim of this study was to compare the percentage of the residual gutta-percha–occupied area (PRGPA) in root canals after retreatment using Pro-Taper retreatment files (Dentsply Maillefer, Ballaigues, Switzerland) with or without the additional use of Self-Adjusting Files (SAF; ReDent-Nova, Ra’anana, Israel).

METHODS: Root canals in 33 curved mesiobuccal roots of the first maxillary molars were cleaned and filled with gutta-percha and AH26 sealer (Dentsply De Trey, Johnson City, TN). Retreatment instrumentation was performed in 28 roots with ProTaper retreatment files and Hedstrom files. The Additional use of SAF was performed in 14 of the 28 roots. Five roots were not retreated. All roots were sectioned horizontally at 2, 4, and 6 mm from the apex. PRGPA was measured at each section. Scores 1 through 5 were used to represent the increasing extent of PRGPA; score 1 was 0%, and score 5 was >30%. The data were analyzed with nonparametric tests.

RESULTS: Score 5 was recorded in all sections from roots that were not retreated. In retreated roots, the scores for the group using SAF were significantly lower than that without using SAF (P = .045); however, scores were higher at 2 mm than at other levels of the root regardless of whether the SAF had been used (P = .03).

CONCLUSIONS: The complete removal of gutta-percha from the apical portion of curved canals remains a challenge. The additional use of SAF removed more gutta-percha than ProTaper alone.

The full article is available (PDF) on Researchgate 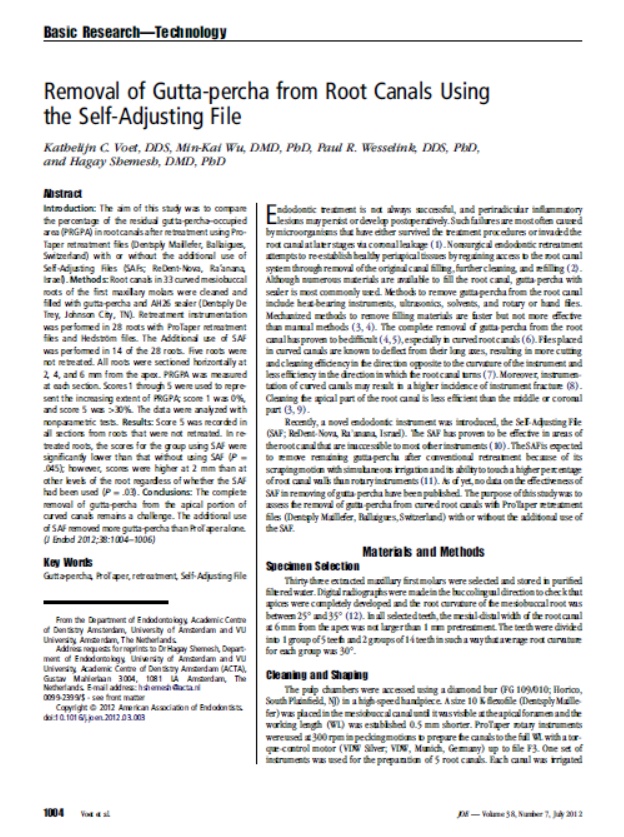